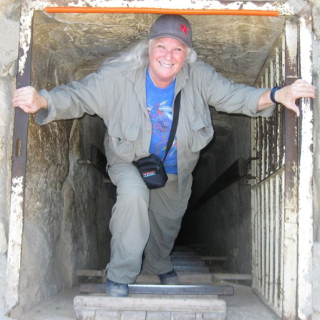 I tell your story the way you want it told.

San Clemente Island is like a neighbor’s fenced backyard. We can see part of it. We can hear activities in it. But the truth is that most of us don’t know anything about it. If we’ve heard about San Clemente Island at all, we think that it is used only for bombing practice for the Navy, and that it has goats roaming all over it; not a good combination for either Navy or goats.

Most of us don’t know, for example, that the non-native goats were probably brought to the island in the late 1800s from nearby Santa Catalina Island. Or that by 1860, the island was used extensively for sheep ranching.

During the Civil War, Tom Gallagher was stationed on Santa Catalina Island. He is thought to be the first person to raise sheep on San Clemente Island. When he first set foot on the island, the grass grew down to the tideline. After 20 years, he had increased his flock to 20,000 sheep and the grasslands had decreased accordingly from over-grazing.

In 1900, official leasing of the island began by the San Clemente Wool Company (Staffordshire sheep), which was bought out in 1903 by Charles T. Howland. According to the San Clemente Island Goat Association, Howland sold the sheep operation, including 25,000 sheep, stallions, mules, and jacks to Lewis Penwell (San Clemente Island Sheep Company) in 1916. When the Navy took over the island in 1934, the sheep were removed to Delano, Ca. but the goats were allowed to remain, for a while.

Ridding the island of the feral goats became a complicated problem. The almost indestructible herds continued to thrive despite attempts to remove them. In 1955, the Navy proposed importing mule deer and wild pigs to the island for hunting, all eating the same plant life as the goats. The Navy’s objective was not to kill the goats, but to try to restore the island’s native ecosystem, which did not include feral goats. By this time, many of the native plants were decimated and plant life was in danger of becoming extinct. The goats were thriving.

In 1972, the Navy hired a series of cowboys, wranglers, ranchers and rescue groups to try to remove the goats, which were reproducing too fast for a healthy environment. Many rescued goats ended up at Ranch San Diego in California and Black Beauty Ranch in Texas, both owned by the Fund for Animals. Most of the remaining goats were neutered. Some are now living at the Santa Ana Zoo Petting Farm.

As a final resort, the Navy hired a group of civilians to exterminate the remaining goats. They managed to eradicate about 3,000 of the sturdy animals. The last feral goat was eliminated from the island in 1991.

Hotel and Recreation Spots
The goats gave way to a tight little community at Wilson Cove, on the northeast shore of the island. Naval personnel can reach the airstrip there after a 25-minute flight from Naval Base Coronado. About five miles from the air terminal on the island are residential barracks, a store, galley for meals, bowling alley, and other amenities. 12.5 miles from the airstrip is Mount Thirst – San Clemente Island’s highest point at 2000’ above sea level.
The Navy Gateway Inn and Suites on San Clemente Island is similar to the popular chain small hotels you might find on your next road trip. It offers two types of pleasant rooms – standard or a suite. Amenities include free laundry, computer access, hair dryers, coffee makers, refrigerators, microwaves, and cable TV.

Residential housing is provided for nearly 200 people staffing the facilities, including research biologists and other scientists studying the endangered or threatened wildlife and plant species inhabiting the Island.  Commander Brian Flick serves as the erstwhile Mayor of this island outpost.

Fueling Facts
Part of the island’s mystique is fueled by the fact that you can’t go there without the Navy’s permission. To see its 56 volcanic square miles first hand, you need to be on active duty, a civilian contractor assigned to the island, or a visitor on official business.
Speaking of fueling, the Island Fuel Facility recently underwent a $31 million renovation project replacing the fuel storage facilities and pipeline to ensure that Navy aircraft will have the essential fueling support they need to keep flying into the future.

The Navy-owned island still serves as a live-fire range as well as a research facility. It plays a pivotal role in tactical training for both fixed-wing and helicopter aircraft squadrons assigned to Navy Region Southwest. Because of this, enhanced aircraft fueling capabilities are critical. The San Clemente Island fuel facility dispenses more than 80,000 gallons of jet fuel for hundreds of Navy, Joint Services, and Allied Forces aircraft each month.

Naval personnel and visitors are not the only population on the Island. According to Melissa Booker, Navy wildlife biologist, the Navy spends more than $7 million a year to protect the island’s endangered or threatened wildlife. The fragile habitats of island wildlife and plants are monitored carefully, even in areas reserved for military exercises. Sniper training has been reconfigured to avoid nesting areas. Bombing targets, including plywood replicas of enemy tanks and missiles, have been relocated away from known populations of endangered species. Bombardment ranges remain on the southern end of the island. Beaches on the north will still be used for amphibious assault training.

Once considered the most endangered bird in North America, the San Clemente Loggerhead Shrike is found only on San Clemente Island. The Shrike recovery program has cost the Navy more than $30 million since 1991, and is the third most expensive species conservation program within the Pentagon. Navy – employed biologists study these songbirds whose total population dropped to 14 in 1998. They have been bred in captivity since 1991, and about 15 – 20 of the tiny birds are released back into the wild each year. The biologists must carefully match the small black and gray birds for mating, or the female may kill the male. The program has shown a high degree of success as the bird’s population rose steadily to peak at 82 pairs in 2009.  However, the Southern California drought took its toll on the population, which has decreased to 41 pairs this year.

Ten federally protected species of animals and plants live on the Island. Three of them have recently been downgraded. The Navy petitioned to have the San Clemente Island Night Lizard taken off the endangered species list in 2014 and it was de-listed that year. An estimated 21.3 million night lizards occupy the 21-mile-long island, one of the highest densities of any lizard on earth. Over half a foot long – compared with its two-inch cousins in the California desert – the lizard with bright stripes and mottled green scales spends its entire life within a few yards and bears its young live, as mammals do. In addition to the Island Night Lizard, two species of plants have been downgraded to “threatened”, and the San Clemente Bell Sparrow’s population has increased 150%, spreading across most of the island.
In spite of its cautionary action, the Navy still maintains a balancing act with the island’s wildlife. According to Melissa, the U.S. Pacific Fleet was limited for a decade in the numbers of days it could use the island. Some incendiary devices were banned in certain conditions because fires sparked might burn shrike habitat. “Thanks to the Navy’s conservation efforts, primarily the removal of the goats, habitat is recovering and listed species are gaining ground,” she says.

With these advances, the Navy has been able to remove restrictions on training that lasted a decade. That $7 million annual price tag now buys more than birds, lizards and plants. It buys continued training for the Navy Seals and the Navy’s Pacific Fleet.

I tell your story the way you want it told. View all posts by iwritewordssc